Review of Infinity On High Album by Fall Out Boy 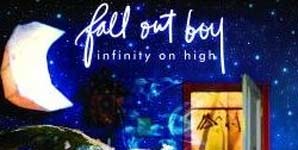 Having been propelled to superstardom with their “Sugar, We’re Going Down” single and subsequent album “From Under The Cork Tree”, Fall Out Boy are at the forefront of all the ‘emo’ scene. Tickets for the band’s handful of shows beginning at the end of March were quickly snapped up and the quartet will be taking their place of the Main Stage at this year’s Carling Festival.

Testament to FOB’s popularity is the introduction made on album opener “Thriller” by rap mogul Jay-Z, not the most obvious figure that could make a guest appearance. A triumphant thanks to the band’s fans, it demands fist-pumping crowds for a grand chorus, before giving way to the stadium-rock (including shimmering solo) of “The Take Over, The Break Over”. Two tracks in and there is a clear intent of FOB to raise their music to the next level – even the moshpit-friendly lead track, “This Ain’t A Scene…” has a slickness not apparent on this album’s predecessor. It gets even better with the feel-good tone of “I’m Like A Lawyer With The Way I’m Always Trying To Get You Off (You + Me)”. Despite a ridiculously long title, the mid-tempo funk reminiscent of Maroon 5 leads into a sing-a-long chorus with the sweetest of melodies.

Disappointingly, the fantastic start to “Infinity On High” can not be sustained, with the anything but “Golden” failing to be a touching piano ballad. The likes of “You’re Crashing But You’re No Wave”, “Bang The Doldrums” and “Don’t You Know Who I Think I Am?” soon become repetitive and are thankfully broken up by the relaxing groove of “I’ve Got All This Ringing In My Ears…” The cinematic strings of “Thanks For The Mmrs” lead into a blistering chorus which is also another offering, but a record which initially promises so much descends to being strictly average.