Review of Folie a Deux Album by Fall Out Boy

Review of Fall Out Boy's album Folie a Deux. 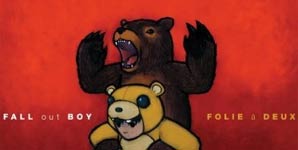 Studio album number five from Fall Out Boy comes hot on the heels of last year's live record and will be supported by a UK tour in March. It is a return to the 'day job' for the band's bassist Pete Wentz, who in recent times has filled column inches due to his celebrity relationship with Ashlee Simpson.

Since their breakthrough in 2006, FOB have delivered a steady stream of rock songs with pop melodies, earning them a place at the emo genre's top table. It is because of this past reliability that 'Folie a Deux' comes as such a surprise - not due to a reinvention of their sound but because, barring the delightful 'America's Suitehearts', the anthems are conspicuous by their absence. Recent single 'I Don't Care' scraped into the lower reaches of the UK chart and this is indicative of the lack of tunes and hooks on offer. Lyrically the band are also struggling, with '(Coffee's For Closers)' utilising an embarrassing 'in the air/just don't care' couplet, while 'The (Shipped) Gold Standard' declares 'sometimes I wanna quit the song and become an accountant' - this may not be a bad move as FOB are lacking in inspiration on this evidence.

A series of guest appearances litter the tail end of the record, of which the collaboration with Elvis Costello is noteworthy. 'What A Catch, Donnie' is a bluesy piano ballad which bursts to life with excellent string use, certainly not the usual style you'd expect from FOB. Debbie Harry appears on the easily dismissible 'West Coast Smoker' and what is labelled a bonus track (though is actually quite torturous) features John Mayer - the abysmal cover of Michael Jackson's 'Beat It'. To take a classic pop song and make it sound so painful might be considered a difficult job, but it's pulled off with some aplomb here and only serves to emphasise the lack of quality on this record.