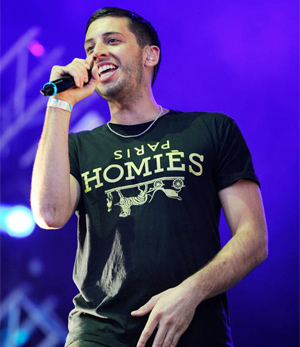 Hotfooting his way straight onto the airwaves this January in true Example style is the UK's biggest dance anthem hit-maker, returning with his latest single, 'Kids Again' which will release on 16th March.

One of the UK's biggest male artists following on from his #1 platinum album 'Playing in the Shadows', and most recent gold selling album, 'The Evolution of Man', Example has notched up two huge Top 5 albums, six Top 10 singles including two No.1's. The release of 'Kids Again' marks the start of yet another massive year for him as he's poised and ready to release his fifth studio album via his new label home, Sony Music's Epic UK.

Having hung up his rapping boots for good, last year Example showcased both his vocal and undeniable production skills on the first monster single, 'All The Wrong Places', from the new album. True to form, 'Kids Again' offers no respite from the high-octane, synth driven anthems Example repeatedly tears up the charts with. Adored by his ever-growing army of fans who notoriously shatter dance floors and festivals fields to pieces during his live sets, this new single pays homage to his signature main stage festival and stadium sound.

The live arena is where Example is a true master, his critically acclaimed live sets have seen him sell out a mammoth UK arena tour, projected him to main stage headline slots at two of the UK's biggest dance music festivals, Global Gathering and SW4, while he's effortlessly stolen the show on line-ups including Rockness andParklife along with clinching one of the biggest televised BBC broadcasts to millions from Glastonbury 2013 of hisOther Stage performance ahead of co-headliners Chase & Status. Always a regular favourite on the White Isle, Example sound tracked last summer with his season residency at Ibiza and Mallorca Rocks alongside his assault on the worldwide festival circuit playing to huge crowds everywhere from Sydney to Switzerland, Bali, Budapest, Auckland and Azerbaijan.

'Kids Again' will be available to pre-order from iTunes on 19th January.