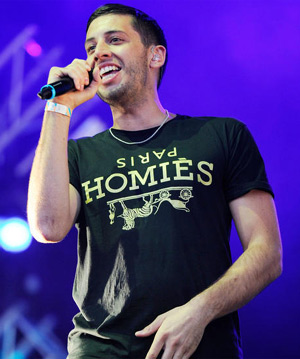 This summer Example returns with a brand new single, 'All The Wrong Places', a high octane, unabashed musical onslaught which drops on 8th September 2013 through Epic UK.

One of the biggest male artists in the UK, following on from his #1 platinum album 'Playing In The Shadows', Example has already notched up two huge Top 5 albums, five Top 10 singles, including two No.1's and the release of 'All The Wrong Places' marks the start of yet another massive year for him beginning with his new deal with Sony Music's Epic UK.

Hanging up his rapping boots for good this track showcases Example's ear for all things electronic as he not only lends his vocals but also his production skills on this latest single.  'All The Wrong Places' showcases Example's undeniable talents in the studio, the new track is pure dancefloor fuel. Example laces the driving bassline with his signature high intensity monster production and anthemic chorus making this an undeniable floor filler.

True to form, Example's relentless live performances have been unrelenting whilst working on his new album, due for release in spring 2014.  After stealing the show at Rockness and Parklife with headline slots he is set to continue his place atop the festival bills at Global Gathering and finishing the summer on home turf headlining SW4.  A mammoth performance at Glastonbury this year asco-headline on the Other Stage, which was broadcast live to millions via the BBC was a huge highlight, he has begun his season residency at Ibiza and Mallorca Rocks and continues his assault on the European festival circuit.