The Real Thing, Tom Stoppard’s 1980s postmodern comedy, opened for its third Broadway run at the American Airline Theatre on Thursday night with Scottish actor Ewan McGregor taking the helm and American starlet, Maggie Gyllenhaal playing opposite him. The play focuses on McGregor’s character, Henry, a playwright, some have said not entirely removed from his author, Stoppard. 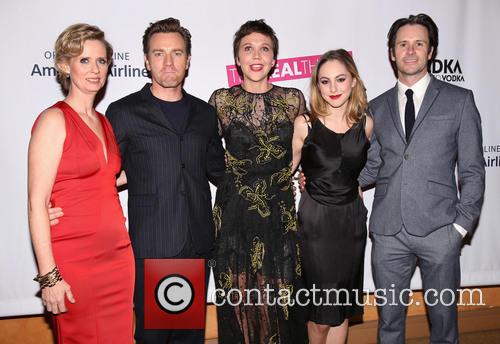 The cast of The Real Thing on opening night

The Real Thing examines the nature of honesty and takes a sharp look at the difference between semblance and reality through its use of the play-within-a-play structure.

The play focuses on the relationship between Henry and Annie, played by Gyllenhaal, an actress who is part of a committee to free Brodie, a Scottish soldier imprisoned for burning a memorial wreath during a protest.

The play itself is a creation marvel but McGregor and Gyllenhaal were given the unenviable task of following in the footsteps of Glenn Close and Jeremy Irons from 1984 and Jennifer Ehle and Stephen Dilane from 2000, both of the latter cast winning Tony awards for their performances.

And unfortunately, it would seem from the critics, that they have not filled the previous actors’ shoes in their entirety.

The Daily Telegraph explains that The Real Thing: "has led a charmed life on Broadway - up to this point, at least." The critic, Matt Wolf, goes on to say: "Out of this cat’s cradle [the plot] comes a dissection of the byways of desire that finds neither Gyllenhaal nor McGregor ideally cast.”

The Guardian echoes this sentiment explaining that "romance misses the mark" and that this is "a show that should gut you [but] let[s] you off with hardly a scratch."

However, there were some positives for the transatlantic duo with The Independent describing McGregor as leading a "triumphant cast".

But perhaps this is set of lukewarm responses is not nearly as good enough as one of the masters of playwriting deserves.