Ewan Mcgregor Calls On World To Save South Sudan Children 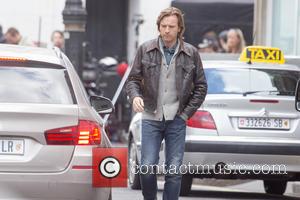 Picture: Ewan Mcgregorer - Ewan McGregor films scenes for upcoming movie 'Our Kind Of Traitor' in Central London. For this particular scene the streets of London...

Actor Ewan McGregor fears South Sudan is on the brink of a massive famine, with the lives of thousands of children at risk.

The region gained independence from Sudan three years ago this week (ends11Jul14) but has been gripped by a bloody civil war ever since.

An epidemic of cholera is looming after more than half a million children fled their homes, and now MCGregor is predicting a huge famine could hit the country within weeks.

The Trainspotting actor, who is a U.K. ambassador for the United Nation Children's Fund (Unicef), says, "In July 2011 babies were born into incredible hope in South Sudan, as the country declared independence and was celebrated as the world's newest nation.

"Now, three years on, the outlook for these same children has taken a dramatic and desperate turn. Famine is looming. Children are already dying every day of hunger and of diseases like cholera... This is a terrible warning for the world. We need to sit up and take action now to stop the suffering, before the scenes of horror increase.

"Unicef is doing everything they can to provide life-saving food for severely malnourished children - as well as vital clean drinking water and vaccinations. However, they just don't have enough money to reach every child. Too many children in South Sudan have empty stomachs and increasingly empty futures. We need to help those children now, before it is simply too late."