Making a film adaptation of Philip Roth's Pulitzer Prize-winning 1997 novel American Pastoral, often named one of the best books of the 20th century, would be daunting to any director. So it was a surprise that actor Ewan McGregor opted to make this his directing debut. 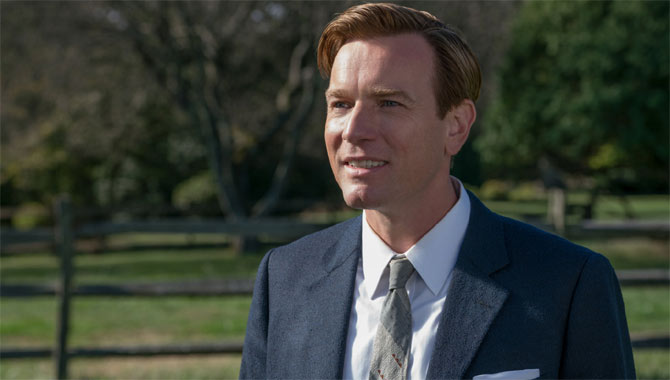 He initially found out about the project when he read for the lead role as Seymour "The Swede" Levov. "I got the script from my agent, and I just fell for it," McGregor says. "I fell for it very hard! At first it was the story about the father and the daughter. I've got four girls myself, so I know very much what that relationship is all about, and it just broke my heart. I was reading about this dad who loses his daughter to a radical political group in the '60s, and she ends up doing a terrorist act. Then she goes underground and he doesn't know where she is."

So he joined the project as an actor. Several months later, director Phillip Noyce had to drop out. "My agent said, 'Look, you have been asking me to find something for you to direct for ages. Well I think it might be under your nose,'" McGregor laughs. "I sort of had that stomach-churning, nervous feeling like, 'Oh s**t!' And then I thought maybe he's right. I was totally relaxed thinking I was just acting, and suddenly it was game on."

McGregor says that directing had been such a long-time goal, that actually doing it felt almost surreal. "I just thought that this is what I had been dreaming of for 15 years," he says. "And now here it is. So how am I going to do it? What kind of director am I going to be? How am I going to pull it off?"

To get himself in the frame of mind to both act and direct at the same time, he looked back at two decades of life on film sets. "My favourite experiences on set are with directors who let everybody do their best work and sort of stand in the middle of it all and allow everybody to excel," McGregor says. "So I tried to do that."

And does he feel like he succeeded? "Basically I look at it and say, 'Well, this is the film I wanted to make. This is what I had in my head,'" he says. "At least I like it, and hopefully people will respond to it. And that's exciting."

Watch the trailer for American Pastoral: