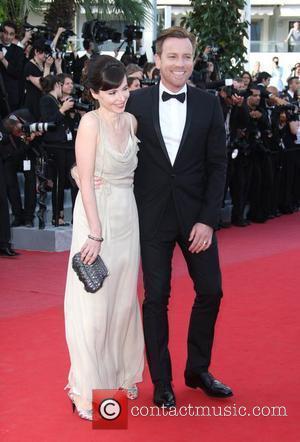 Actors Ewan McGregor and Simon Pegg are among the British stars who have lauded tennis ace Andy Murray after he defeated Roger Federer to claim Olympic gold at the London 2012 Games.
Murray and Federer returned to Centre Court at Wimbledon for the Olympics men's singles final on Sunday (05Aug12) in a rematch of the 2012 Wimbledon Championships, which saw the Swiss star emerge victorious just last month (08Jul12).
This time, the Scottish sportsman revelled in having home court advantage and he turned the tables on Federer, crushing him 6-2, 6-1, 6-4 to take home the gold medal for Team Great Britain.
A slew of celebrities tuned in to watch the big match and immediately took to their Twitter.com pages after the win to praise Murray for a game well played.
MCGregor was among the first to tweet his congratulations to his fellow Scot, writing, "Gold Gold Gold Gold! Beautifully played Andy Murray!", while Star Trek actor Pegg adds, "Andy Murray wins Gold!!!!! Oh good god could this nation's pride gland swell to a greater tumescence than that with which it throbs now?!!!"
CNN newscaster and America's Got Talent judge Piers Morgan tweets, "Booooom!!!! Fantastic! Gold for Murray. TeamGB", and Scottish singer Lulu posts, "Yes This is your time ma (my) boy."
Harry Potter beauty Emma Watson, comedians Eddie Izzard and David Walliams and singer Alexandra Burke also tweeted their excitement and pride at Murray's victory.
Murray went on to play for gold in another match on Sunday in the mixed doubles category - but he and partner Laura Robson could only manage silver after losing to Belarus' Max Mirnyi and Victoria Azarenka.