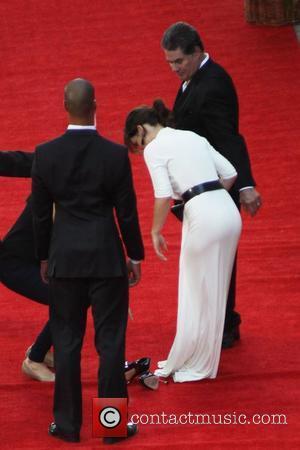 Actress Evangeline Lilly realised she was pregnant on the set of new movie Real Steel when she had to throw herself into co-star Hugh Jackman's arms.
The former Lost star had just returned from Africa and couldn't decide if the nausea she felt was a bug she had brought back with her or morning sickness - but Aussie hunk Jackman helped her make up her mind.
She explains, "Hugh Jackman was my lifesize pregnancy test. When I was shooting my last scene in the film, I was about a month pregnant and I was 99 per cent sure I was pregnant but I had just come back from Africa and I wasn't sure if I was feeling sick because I had malaria or because I was pregnant.
"I had to do this scene where I jump into Hugh's arms, which is not a bad thing to do unless you're a month pregnant... I run up to him and I leap up onto him and as I do so it feels like my stomach tears... It just felt like it ripped open.
"They (crew) were like, 'OK, that's a great rehearsal, let's do that again...' It was really painful and at that moment I knew, 'I'm pregnant!'"
But Lilly pressed on with the scene, adding, "Would you choose to have someone else jump into Hugh Jackman's arms for you if you had the option?"