Evaline - There There Video

LA based alternative rock band Evaline's new single 'There There' is available to download and is taken from their upcoming debut album, 'Woven Material', which was released in June 2011.

The video for 'There There' was directed by Wylie Mihlberger & Mark Yamamoto. Shot in black and white, it shows the band - in slow motion - setting up and tuning their instruments before rehearsing, which contrasts the fast paced song perfectly.

Evaline are Richard Perry, (Vocals, Cello and keys) Dominic DiCiano (Guitar), Steven Pedersen (Bass), Christian Lewis (Guitar) and Greg Peterson (drums) and Dan Peterson (guitar). Their debut album was recorded in the UK and was produced by Dan Austin, who has also produced for the UK indie band Doves. 'There There' was iTunes 'Single of the Week' on July 19th 2011.

Evaline have toured with a range of diverse artists, including Deftones; Placebo; Neon Trees; Paper Tongues; Dredg and Young Guns. They have also performed at SXSW, Hard Rock Calling and Download Festival. They also supported My Chemical Romance at the London, iTunes festival in July 2011. 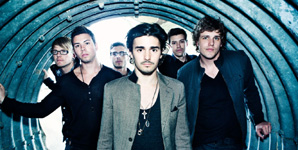 Evaline - There There Video