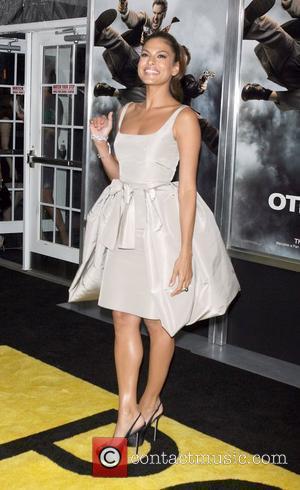 Picture: Eva Mendes attend the NY movie premiere of 'The Other Guys' at the Ziegfeld Theatre New York City, USA - 02.08.10

Screen siren Eva Mendes had Mark Wahlberg and Will Ferrell sniffing her out on the set of their new movie THE OTHER GUYS - because they love the way she smells.
The Latina beauty became good pals with the two actors during filming and she immediately won them over with her floral scent.
But Mendes reveals the stars are continuing their odd penchant for taking a whiff of her perfume whenever she's around - they even sniffed her out at the premiere of the cop comedy in New York on Monday (02Aug10).
And the actress admits she's strangely amused by their odd behaviour.
She says, "Mark and Will love the way I smell, so they just sniffed me on the (red) carpet and they both kind of sniffed me at the same time, and it's very, oddly appealing.
"I don't know (what the smell is), I mix my perfumes but I have this old Cuban perfume that has violets, so they must like the smell of violets."