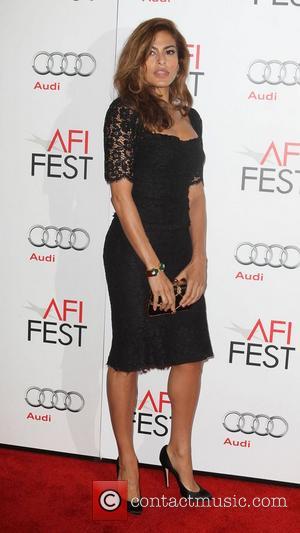 Eva Mendes could be seven months pregnant with Ryan Gosling's baby, unconfirmed reports have suggested. As well as expecting a child, the couple could also be gearing up to get married very soon, if reports from OK! Magazine are to be believed.

"Eva is thrilled. She's been ready for motherhood for a while now, and to be sharing this experience with Ryan is a dream come true for her," an insider told the US magazine.

The source underlined the potential significance of fatherhood for Gosling, saying "The source continued, "Ryan grew up without a dad, so he always said when he had kids, he'd be there no matter what. This is it for him."

The rumour seems to have been fuelled by an incident when the Place Beyond The Pines star reportedly told officers Transportation Security Administration point for a routine pre-flight security check that she would not be able to pass through the body scanner "because she's pregnant"; a claim that was later denied by the actress.

The acting couple, who have been dating since 2011, could also be set to wed very shortly in keeping with Eva's traditional values. Another source added: "Ryan doesn't think they need to marry just because they are having a baby but Eva believes it's important to have their lives fully intertwined."

The actress has spoken in the past about starting a family, revealing that she didn't feel the pressure to have children in a hurry. "In a weird way I fluctuate between not giving it any thought and wanting to leave it up to whoever's running the show, then giving it a lot of thought. I have to be honest, I don't feel the urge yet," she told Stylist in 2011.

"Maybe I'll do it when I'm 41 or something; that's happened to a lot of people I know who decided not to. I don't feel the ticking clock.I feel I have time. Whether that's a reality or not, I don't know. I'll just be patient."

Neither Eva Mendes nor Ryan Gosling has commented publically on the reports.

Eva Mendes And Ryan Gosling Are Allegedly Expecting A Baby.