Welsh singer-songwriter Euros Childs unveils a pretty daft video for his track 'Tete A Tete' which is from his upcoming ninth album 'Situation Comedy' due out on October 21st 2013 through his very own label National Elf.

The video starts with Euros Childs sat in a chair in a tuxedo as director Ryan Owen Eddleston snaps a clapperboard to show that this was filmed in one take. It begins with two arms reaching over from either side of him and repeatedly stroking him before shoving his head around and pulling his hair. He is drawn on with make-up, pinched, battered with a truncheon and a bouquet of flowers, attacked with flour, tea and cream pies and sprayed with silly string as he remains seated, unfazed, miming along to his tune. It's a pretty impressive feat of tolerance on his part, and the accompanying song is no less impressive. It has strong 60s vibes to it and is the perfect upbeat and infectious tune to cheer us up with the oncoming chilly weather.

'It was a good excuse to dress up in a tuxedo, partake in a bit of slapstick and get my face scribbled on', Euros Childs said about filming the video. The album will be available to download and by as a physical copy for whatever one can afford; a method which the singer has admitted has created more sales. He is about to embark on a nationwide tour this October, kicking things off in Liverpool. 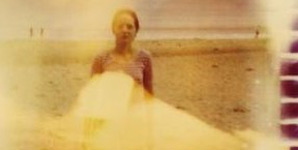