Review of Everyone Loves You Single by Eureka Machines

Review of Eureka Machines single Everyone Loves You. 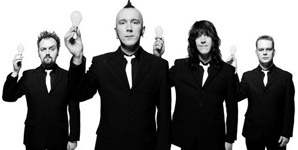 'Everyone Loves You' is the first single from the debut album 'Do or Die' from the Leeds' boys that are the Eureka Machines.

The Machines are a punk band with a grunge-rock edge; plenty of chunky power chords here with an abundance of sixteenths on the hi-hat and thumping bass drum to give it that American grunge feel. The track has plenty of dynamics to it and is structured well, but it has to be said the choir overlays seem to be somewhat out of place, although they probably seemed like an intelligent touch at the time. Aside from this 'Everyone Loves You' has a catchy chorus and is easy on the ear.

The three remaining tracks on the single include two live tracks which were recorded for the BBC's Raw Talent enterprise and also a studio track, 'The Bigger They Are, The Harder They Fall'. This track shows a better side to the Machines in my opinion, its sounds less like an attempt to emulate the US grunge bands and comes across as more original in nature. Some clever backing vocals and subtle lead vocals give the track a 'big' sound.

The two live tracks 'The Story of My Life' and 'Scream Eureka' show the band are very capable of performing live and are probably worthy inclusions on the CD. Although the latter does drift back towards the tacky side of the US grunge scene, which have heard a million times before. Come on boys, give us some your own blood sweat and tears like we have heard you can.

Eureka Machines - Everyone Loves You

Eureka Machines - Do or Die