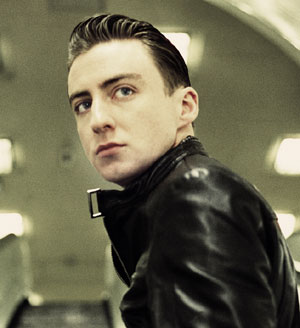 Parisian producers extraordinaires, Chateau Marmont, add a touch of effortless swagger and laidback cool to their remix of the future Eugene McGuinness single Harlequinade. Synths and saxophones melt together to create an almost cinematic and futuristic journey. Known for their remixes of the likes of La Roux, Midnight Juggernauts and Ladyhawke, the French four piece come from a time when people still believed in the future, but with nods to, as the name suggests, vintage melancholia and widescreen romance.

The original track Harlequinade is taken from Eugene McGuinness' forthcoming album The Invitation To The Voyage, which will now be released on 6th August.

Following his tour as special guest to Miles Kane, Eugene McGuinness will be performing live in the UK over the next few months with a headline London show at the Lexington on July 3rd. Make sure you catch him at one of these dates: