Review of Monsters Under The Bed Single by Eugene McGuinness 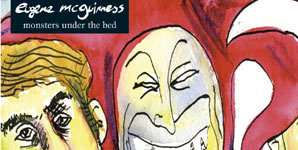 We live in an era of total information immersion - and it's driving us mad. It's all too much to take in; no matter how much we cram there's still So! Many! Websites! To! Check! So! Much! TV! To! Watch! and now with Sky+ You! Can! Watch! It! All! Liverpool-based 21 year-old Eugene McGuinness understands this, and it's led him to create one of the most wonderfully crazed singles in recent times. 'Monsters Under The Bed' is a delerious paranoid rant against modern life's ever-punishing information overload, skittering with lo-fi drum machines, merry-go-round synths and yelping vocals. In just over 2 minutes McGuinness howls at the constant whirring of his brain keeping him awake until the early hours, throwing in some choice images along the way: "And when the talkshow ends I scream right at the screen for more pregnant teens / I spent 5 hours on the net last night, avoiding the monsters under my bed". It's a damn-near perfect sonic evocation of bloodshot hunched-over-the-keyboard-at-3am insomnia and it's catchy as hell.

Flipside 'Myrtle Parade' is a little more conventional but hardly worse for it, a wry observation of a society falling to pieces - "keep your head down and your hood up / oh, the ex-offender said 'I swear officer, I found her tied to my bed'". At times reminiscent of Mull Historical Society but underpinned with the bontempi intermission rhythms so beloved of Blur all those years ago, it's a rather wonderful song.

As McGuinness himself exclaims on 'Monsters...', Fan-f**king-tabulous. We will be hearing more of this young man very soon.