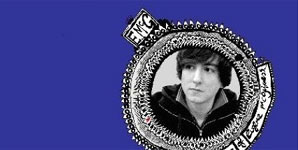 Is it just me, or is there a surfeit of these alt.folk/electronica types at the moment? Round every corner lurks a bedroom musician, it seems. And the latest one to wind up being centrifuged in my CD player is one Eugene McGuinness. A new name to me, I have to confess, and the detested MySpace tells me cock all about him. Thank heavens for the venerable BBC, then: they tell me he's a 21-year-old Scouser and that he's 'idiosyncratic'. The first track on this mini-album, 'High Score' suggests a one-man stab (no, not literally) at The Hidden Cameras, with rather mannered vocals. Now, when I was a very young chap with hands not big enough to play the piano properly, my then music teacher (who was, bizarrely, a butcher by day) pointed out that all the best tunes have small intervals between the notes. This is not a lesson that has dawned on Mr McGuinness: 'Monsters Under The Bed', for example, has a tune that jumps about all over the place, so much so that he's almost yelping at times, and at others he indulges in an inadvisable falsetto. The chorus isn't bad, but the quasi-Wurlitzer wouldn't sound out of place in a Scooby Doo denoument.

'Vampire Casino' is largely guitar and voice. Again there's some falsetto, and to my ear, the guitar could do with a tune. It's pretty inconsequential, really. 'Bold Street' is more Hidden Cameras-lite, and I'm hovering over the 'skip' button in menacing fashion. The lyrics are daft stream-of-unconsciousness ('sonnet' rhymed with 'vomit', anyone?), but the ice-cream van keyboard lends it a naive charm - that is, until he pisses it all away by singing 'Twinkle, Twinkle Little Star' and goes for a high note that sounds horrible. No, Eugene, no.'A Child Lost in Tesco' is far more interesting, with an odd, brassy, synth noise and a sparse yet swampy groove. Again, though, there's a yawning chasm between the first two notes of the melody, and his voice is all over the place. It's like he's got a load of voices but not one to call his own. It's not like you can hear it and say 'Oh, that's Eugene McGuiness', but you can say 'Oh, that sounds like so-and-so'. 'Vela' is actually quite nice, but the best bits are borrowed from 'She's Leaving Home'. What is it with Scousers? Do they put Beatles in the water supply over there? Easily the best track so far, though.'Madeleine' is initially a woozily reflective piano piece, and the vocals sound way better when the harmonies come in (warning: contains swearing). It's quite dreamy and sweet, and doesn't outstay its welcome either. 'A Girl Whom My Eyes Shine For But My Shoes Run From' (grammar - let's not go there, eh?) closes the record. It's a decent-ish guitar-driven thing, but the vocal sounds harsh, verging on a yodel at times. Towards the end, a synth comes in, the vocals take a back seat, and everything's immeasurably prettier. Much better. Not sure we need the Buck Rogers sample at the end, though.A mixed bag, then. The thought occurs that Mr McGuinness has gone for the 'idiosyncratic' approach in an attempt to stand out from the herd. Understandable, since everyone with an acoustic guitar seems to be making a record these days. Whether he does enough to stand out and whether he actually sounds enough like himself are both moot points, though.