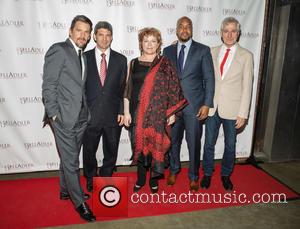 The couple, running for the first time, hope to raise cash for homeless and addiction charity The Doe Fund when they hit the streets on the Big Apple on 1 November (15).

The actor announced the news in a statement on Wednesday (07Oct15). It reads: "Ryan and I are both feeling daunted and terrified about taking on the TCS New York City Marathon, but fortune favors the bold, right?

"We are of course excited, too! We hope it’s going to be a great day for all the runners, and know that running the race on behalf of The Doe Fund will raise awareness to help many deserving people achieve their own personal success and stability."

The celebrity line-up for this year's race has yet to be released but Ryan Reynolds, Katie Holmes and Pamela Anderson have competed in the New York City Marathon in recent years.