Errors release their new single Pleasure Palaces on January 23rd, 2010, with their third album 'Have Some Faith In Magic', out on January 30th, 2012, on Rock Action Records. Errors have announced a full UK Tour in February 2012, with a headline show in their native Glasgow in May 2012.

Errors emerged at the tail end of a period when anything purely-instrumental and guitar- based became lazily tagged "post-rock". However, the band has now distanced themselves from that loose genre so much that any fleeting comparison to it is now completely redundant.

Errors' fans have long had their faith rewarded by the band and their third album only looks set to continue that trend. Their headline tour will see them take in cities such as Manchester and Cardiff. 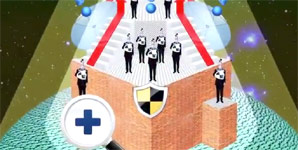