Director Paul Feig was joined on the red carpet at the New York premiere for 'The Heat' at the Ziegfeld Theater by his wife Laurie Karon and several of the movie's stars including Demian Bichir with his Mexican actress wife Lisset Gutierrez, 'Still Single' star Jamie Denbo, Jessica Chaffin from 'Zoey 101', 'The Big Bang Theory' actor John Ross Bowie and Nate Corddry from 'Sunset Strip'.

Continue: Video - Director Paul Feig Arrives At 'The Heat' NY Premiere Alongside Much Of The Cast - Part 2

Miss Utah Flub – Painful Viewing, But Did Miss Utah Have A Point?

In defense of Miss Utah - was it a horrible question?

It might seem puerile, even offensive to laugh at it, but the Miss Utah flub on Miss U.S.A makes for such awkward viewing, it’s nearly impossible not to laugh. The then hopeful, who lost out to eventual winner Erin Brady, really doesn’t do well when asked about gender inequality in the U.S, or does she?

"A recent report shows that in 40 percent of American families with children, women are the primary earners, yet they continue to earn less than men. What does it say about society?" was the question posed by a member of the audience, to wit Powell offered up a fairly ridiculous answer. "I think we can relate this back to education and how we are continuing to try to strive to -- figure out how to create jobs right now," she said. "That is the biggest problem and, I think, especially the men are seen as the leaders of this, so we need to -- create education better so we can solve this problem."

Steven Tyler and Aerosmith have been rinsed in the rumor-mill recently, as both he and the band are having to dispute rumours and explain some confusing events.

Firstly the band's website was hacked, which left the site showing only a picture of crossed arms. The website eventually reverted to its normal state for a few days, but then again, the picture appeared again, reports Noisecreep, but this time it came with a brief message the resembled the beginning of a letter. It included hints as to whom hacked the site, seemingly a band that are looking for a bit of publicity. Speaking to NoiseCreep Steven Tyler said he had no idea what had happened to the site, and had even considered that it was a stunt done by their own tech team. "I saw the "arms up" picture last week and thought, s***, that looks pretty cool, what are we doing?" he said. "I can't figure it out... But I'll tell ya - they got the balls. I see a stunt like this and think, if this is really a band, then all I want do is hear their music." However, he said "if they suck I'll kick their ass and maybe sue them".

Tyler and his reps were also forced to defend the status of his relationship with his fiancee, model Erin Brady, which was reported to have broken down. As E! reported "Steven has been trying to maintain his lifestyle and to stay clean. The tour is really important to him and the band. So he decided to end it." However, his reps disputed this, and said "Just as any couple goes through trials and tribulations in a relationship, Steven and Erin are asking for their privacy at this time. They are engaged to be married and each committed to their sobriety. Any claim to the contrary is absolutely false." Hopefully all of these rumours will die down in time for their much anticipated new album 'Music From Another Dimension!' which will be released November 6th 2012, 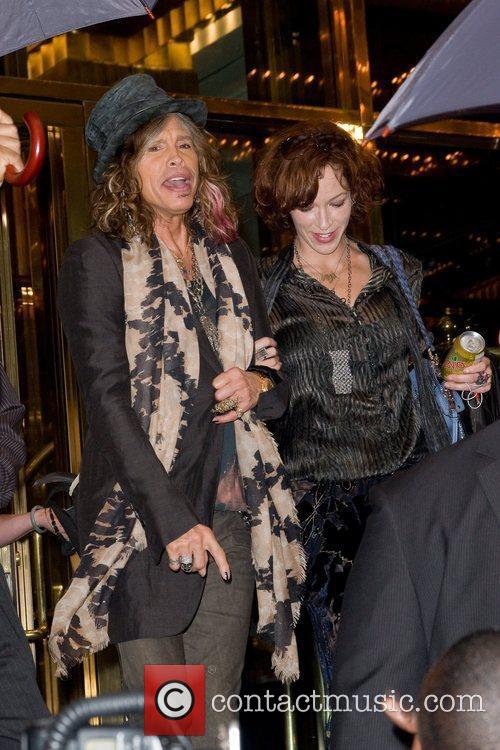