For a biopic of a real-life person, this feels like an oddly standard mob thriller. It's the true story of Boston gangster James "Whitey" Bulger, and it's told with gritty filmmaking and robust performances. But there's very little about the movie that sets it apart, leaving it as yet another depiction of violent criminal ambition and betrayal. And by the end, it's difficult to escape the feeling that we've seen it all before. 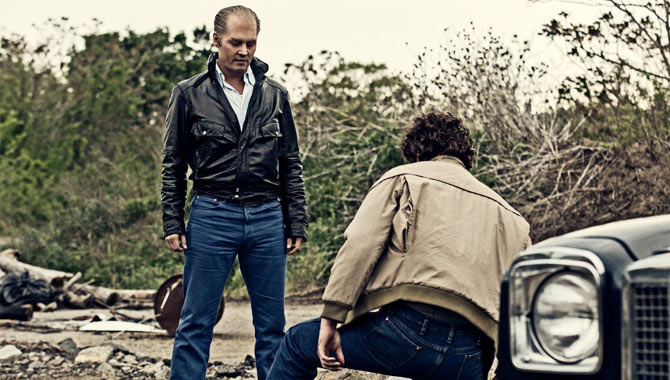 It opens in 1975 South Boston, where Jimmy Bulger (Johnny Depp) runs the Irish mafia, while his brother Billy (Benedict Cumberbatch) is a senator. Their childhood friend John Connolly (Joel Edgerton) is an FBI agent who has asked for their help in taking down the rival Angiulo family, which Jimmy sees as a win-win situation: he'll get rid of the competition while avoiding jail himself. Over the next 10 years, Jimmy expands his operation dramatically, and he's not afraid to get his own hands dirty as he sorts out problems that are created by his sidekicks (including Rory Cochrane, Jesse Plemons and W. Earl Brown), all of whom are increasingly annoyed at his control-freak ways. But as Jimmy becomes even more notorious, the FBI boss (Kevin Bacon) pressures John to take him down.

The actors dive into their roles. Depp transforms himself physically into a prowling thug with terrifyingly piercing eyes. He may be a heartless killer, but he's also a caring family man. Opposite him, Edgerton has a trickier role as a federal agent who operates more like the gangster he'd rather be, casually ignoring the law to push his own agenda. In the sprawling supporting cast, only a few characters emerge memorably: Cumberbatch has a sparky presence, Cochrane offers some thoughtfulness, and Bacon gets to chomp on the scenery. Other roles are much briefer, especially the sidelined female characters.

Irving Rosenfeld is one of America's most talented con artists but his world of ladies and luxury is hanging in the balance when threatening circumstances force him, along with his temptress business partner and lover Sydney Prosser, to lend his talents to a sting operation set up by the FBI and led by the slightly unbalanced agent Richie DiMaso. Together they set out to uncover the corrupt campaigns behind Carmine Polito, the Mayor of Camden, New Jersey and a powerful political operator. However, Irving's wife Rosalyn Rosenfeld is getting more and more suspicious of her husband's business life and, with his lewd extramarital affairs getting more and more daring, it isn't long before she is driven to extreme lengths to uncover her private issues while in the meantime threatening the stability of the whole operation.

This gangster drama features an all-star cast that will keep you gripped from start to finish. It has been directed by the Oscar nominated David O. Russell ('Silver Linings Playbook', 'I Heart Huckabees', 'Three Kings'), who also co-wrote the screenplay alongside Eric Singer ('The International') in his second feature film. 'American Hustle' will be released in cinemas over in the UK on December 20th 2013.