Jones, 74, has been diagnosed with dementia and speech-limiting aphasia.

Michael Palin has said that Terry Jones can count on his fellow Pythons to rally around him following his diagnosis with dementia and speech-limiting aphasia.

Last month Jones revealed he had been diagnosed with the devastating disease and on Sunday he appeared at Bafta Cymru to accept a lifetime achievement award for his contribution to film and television.

The comedians behind Monty Python have turned into household names and The Holy Grail is potentially their most loved piece. Having been commissioned by the BBC in 1969 Terry Gilliam, John Cleese, Michael Palin, Eric Idle, Terry Jones and Graham Chapman began shooting scenes for a sketch show under the name of Monty Python's Flying Circus. The 45 episodes were full of surreal comedy which each and every one soon became cult classics.

The first Monty Python show in 30 years sold out in seconds prompting more dates to be added to the bill.

The eagerly-awaited Monty Python stage show has been extended from one to five days, scheduled for early July next year. The move to add more live dates to the list came as organisers announced that the first show at London's O2 Arena sold out in 43.5 seconds, according to Sky News, giving modern pop bands a run for their money. 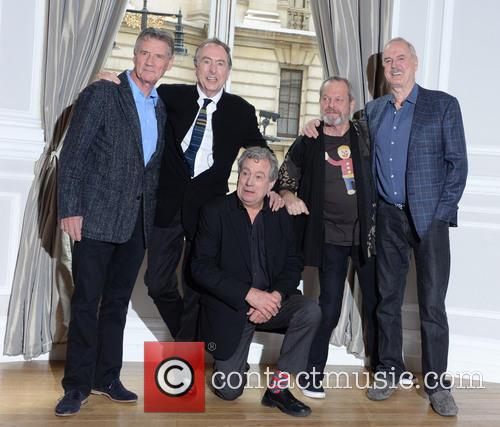 However, it's easy to see why there was so much clamouring for tickets when they went on sale early this morning; the shows at the O2 will be the first time the comedy unit have performed together since 2009 when they celebrated their 40th anniversary with a special show in New York.

Calling all sons and daughters - this is the present your Dad wants.

They say timing is everything when it comes to comedy, although that logic applies to more then a well-delivered joke, it would seem. The cast of Monty Python, John Cleese, Terry Gilliam, Terry Jones, Eric Idle, and Michael Palin, 70 – otherwise known as Monty Python – are reuniting for a stage show, The Sun reports.

The announcement comes just before Christmas, with tickets no doubt going on sale in time for many dads to see an envelope under the tree come December 25th, but Jones isn’t coy about why he wants to get the gang back together for the show.

"We're getting together and putting on a show - it's real," Jones told the BBC. "I'm quite excited about it. I hope it makes us a lot of money. I hope to be able to pay off my mortgage!"

Continue reading: Monty Python Back Together For Stage Show - Just In Time For Christmas

By Victoria Pavlova in Lifestyle / Showbiz on 05 July 2013

The scorned producer won the lawsuit, but lost the friendship.

The producer behind Monty Python and the Holy Grail has won the lawsuit against the comedy team, entitling him to one seventh of the profits from Spamalot – a musical, based on the film. Mark Forstater – one of the people behind Monty Python’s 1975 movie, claimed that he was entitled to an equal share of the Spamalot royalties, while the comedians had only paid him half of that – one fourteenth. While those fractions might not sound too profitable, the musical achieved great success on Broadway in 2005 and entitles Forstater to a hefty sum of money. 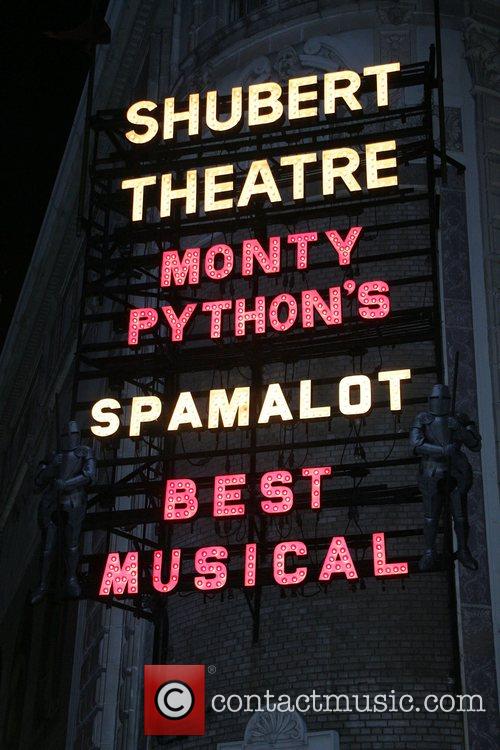 Forstater was entitled to twice the amount he was paid for Spamalot.

The agreement, which was under dispute, was created in 1975 between the producer and Python Pictures. It stated that Forstater was entitled to one seventh of the 50% royalties off any merchandise and spinoff income that the team might receive. Since the musical falls under spinoffs… well that means that there’s a lot more cash in it for Forstater. Justice Norris at the high court ruled that this agreement was valid and that in this case, Forstater should be treated like a full member of the comedy team – or at least be entitled to the respective salary. According to Forstater’s own calculations, said salary amounts to £220,000 plus interest. However, despite the monetary reward, the 69-year-old producer regretted that the lawsuit had cost him his friendship with the comedians.

Continue reading: Producer Of "Monty Python And The Holy Grail" Wins Royalty Lawsuit Against The Comedians

Monty Python Stars Sued For As Much As £1m In Royalties From The Musical Spamalot.

An enigmatic, mysterious man dubbed the 'seventh Python' is suing the stars of Monty Python for the cash they made while performing in the musical, Spamalot, a spin off from Monty Python And The Holy Grail, Sky News reports.

Mark Forstater - who is much less enigmatic now we know his name - is the man behind the case, which is to be heard over 5 days. He - the producer of the 1975 comedy hit - claims that he is due more money from the musical spin off. The court heard that "for financial purposes" Mr Forstater should be treated as "the seventh Python". Posters for the musical call it "a new musical lovingly ripped off from the motion picture," and due to its fantastic success, the brand has been subject to numerous merchandising opportunities, which has boosted the Python's finances considerable, with Michael Palin describing it as his "pension plan". Mr Forstater is suing all five Pythons but John Cleese and Terry Gilliam, who live abroad are not expected to give evidence. The sixth member of the team, Graham Chapman, died in 1989.

The suit will cite an agreement made back in 1974, which will entitle Forstater to a great deal more money from the recent success of the brand. This enlarged figure is thought to be able to swell to £1m.

The producer of Monty Python and the Holy Grail – Mark Forstater - is suing the remaining members of Monty Python over royalty rights to the stage show Spamalot. Eric Idle, Terry Jones and Michael Palin are all due to give evidence at London’s High Court over the next few days. Terry Gilliam and John Cleese will most likely not attend the five-day court case, as they're based overseas. Graham Chapman passed away in 1989.

The popular stage musical Spamalot is described as being “lovingly ripped off” from the movie Monty Python and the Holy Grail and currently Forstater receives one fourteenth of a share of 50% of merchandising revenues. His lawyer, Tom Weisselberg, is arguing that his client should be considered as the ‘seventh Python’ and should therefore receive one seventh of the income. The Pythons are accused of “failing to pay Mr Forstater monies he says are owed to him under an agreement reached with PMP back in 1974.”

Mr Forstater was declared bankrupt in June, though last month, his bankruptcy was annulled and according to the BBC, “he entered an independent voluntary arrangement (IVA) to deal with his debts.” Spamalot was written by Eric Idle and premiered on Broadway in 2005. The show has won three Tony awards and took $1 million in its opening week on Broadway. 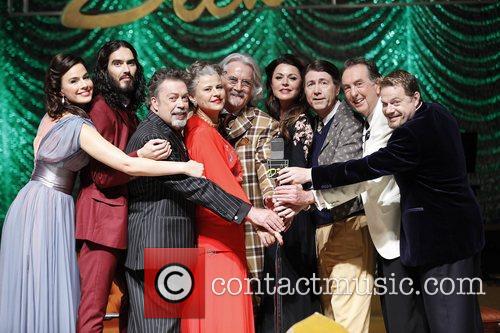 Look at that line-up, it's one for the ages is it not? Los Angeles comedy fans were given an absolute treat as an all-star cast featuring world renowned stand-up comedians, Hollywood actors and sitcom legends performed improvisational musical called What About Dick? Written by Monty Python man Eric Idle, the show saw comedians-cum-actors Eddie Izzard and Russell Brand join up with the likes of acting stalwart Tim Curry, US 80s comedy star Tracey Ullman, Scottish stand-up Billy Connolly and Frasier star Jane Leeves and more for the hilarious play.

The essence of Jay Ward's delightfully dolt-driven cartoons like "Rocky and Bullwinkle," "George of the Jungle" and "Dudley Do-Right" was always a resourceful, goofball mix of silliness, self-cognizance and good, dumb laughs -- a combination that might seem difficult to duplicate outside the medium of deliberately dorky animation.

But two years ago, the balance was mimicked surprisingly well in the live-action "George of the Jungle," with a perfectly cast, pratfall-proficient Brendan Fraser in the title role. But that balance is conspicuously absent as Fraser tries to fill the clumsy shoes of another Jay Ward character -- his vapid but lovable, lantern-jawed Canadian Mountie -- in the almost completely giggle-free "Dudley Do-Right."

Not only does the dilly dorkiness turn to idiocy, which in turn runs rings around the infrequent laughs, but just about the only engaging moment in the entire movie isn't even a sight gag or a goof. It's a completely serious stunt.

Following in the footsteps of the "Fractured Fairy Tales" cartoons, "The Princess Bride," "Ever After," "Shrek" and "A Knight's Tale" -- but never quite matching any of their wit or novelty -- "Ella Enchanted" is an amusingly self-aware fable of handsome princes, evil kings and one very plucky heroine caught up in a magic spell.

Aiming at the tween-ager crowd that made a hit of "The Princess Diaries," 2001's more modern twist on such girlish daydreams, light-hearted director Tommy O'Haver ("Get Over It," "Billy's Hollywood Screen Kiss") enlists "Diaries" charming star Anne Hathaway in the title role as a medieval teenager who was hexed at birth with an obedience spell by an irksome but well-meaning fairy (Vivica A. Fox, stuck in a mock-ghetto-fabulous stereotype).

Having grown up quite stubborn yet unable to resist any demand upon her, Ella manages to get through life keeping her curse on the QT until her widowed father brings home a wicked stepmother (Joanna Lumley) and two even worse and obnoxiously over-played step-sisters (Lucy Punch and Jennifer Higham), who quickly and cruelly figure out that they can make Ella their plaything.