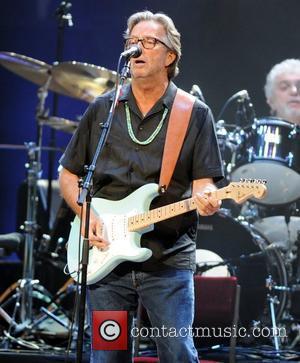 Eric Clapton, Selena Gomez, Enrique Iglesias and Ringo Starr are among celebrities who have teamed up with the widow of Beatles star George Harrison to raise money for the victims of drought and famine in Africa.
Somalia, Kenya and Ethiopia - known as the Horn of Africa due to their location in the east of the continent - have been hit with the worst drought in 60 years and millions of residents are fleeing to find refuge in other areas.
Olivia Harrison, the wife of late guitarist George, founded the George Harrison Fund for Unicef, to benefit life-saving programs for children in Africa - and she's announced all cash raised for the charity in August (11) will be used to help those suffering in the current crisis.
She's called on several famous faces, including rapper Nas, Elvis Costello and Jackson Browne, to use their fame to highlight the Month of Giving initiative - and Olivia's delighted they've all agreed to help out, especially as 2011 marks the 40th anniversary of her late husband's star-studded 1971 Concert for Bangladesh.
She says, "It's deeply heartening to see how the compassion of musicians is handed down from generation to generation.
"In 1971 the crisis was in Bangladesh, today it's the Horn of Africa. My thanks go out to all the musicians who have pledged their support."
And the fundraising has already started - Harrison's Unicef fund released $1 million (£625,000) on Wednesday (27Jul11) for the relief effort in the Horn of Africa.