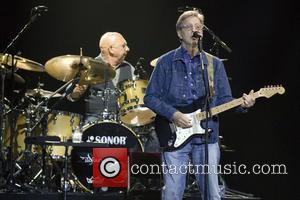 The blues icon passed away in Las Vegas, aged 89, and his famous friends and fans have taken to social media to say goodbye.

Clapton, who collaborated with King on the 2000 album Riding With the King, posted a video message on his Facebook page on Friday (15May15) and said, "I just want to express my sadness and to say thank you to my dear friend B.b. King. I want to thank him for all the inspiration and encouragement he gave me as a player over the years, and for the friendship that we enjoyed."

And he urged new King fans to check out the guitarist's B.b. King: Live at the Regal album, adding, "(It) is where it really started for me as a young player."

He added, "He's been with me literally since the dawn of my musical consciousness. I first encountered him when I was a small child. My father was a musician and would take me around to studios in Houston. We met B.b. King at ACA Studios when I was, maybe, seven. He made a huge impression on me and that encounter continues to resonate.

"Over the ensuing years, we were privileged to spend time in his presence on numerous occasions. He was warmhearted, generous and giving. B.b. King was an early and continuing hero. His passing is very sad but we take solace in the fact that we still hold him in absolutely the highest regard as both a transcendentally talented musician and a truly wonderful human being whose spirit will always be with us."

Gibbons, who often performed with King live, teamed up with his hero in the studio for the track Tired of Your Jive on the blues man's Grammy Award-winning 2005 album B.b. King & Friends: 80.

And fellow blues legend Buddy Guy took to Instagram to share his thoughts about his late friend, alongside a photo of the two guitarists playing together.

Guy wrote, "This morning, I come to you all with a heavy heart. Bb King was the greatest guy I ever met. The tone he got out of that guitar, the way he shook his left wrist, the way he squeezed the strings... man, he came out with that and it was all new to the whole guitar playin' world. He could play so smooth, he didn't have to put on a show. The way BB did it is the way we all do it now. He was my best friend and father to us all.

"I'll miss you, B. I love you and I promise I will keep these damn Blues alive. Rest well."