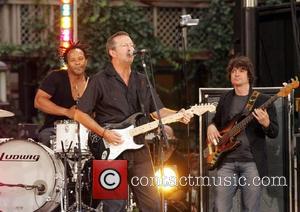 PUBLISHED IN 2006 Eric Clapton has agreed to headline a controversial seven-hour concert supporting the Countryside Alliance in its fight to lift the ban on fox hunting in the UK. The TEARS IN HEAVEN hitmaker, who is a keen game shooter, will join fellow rockers Bryan Ferry, Pink Floyd's Roger Waters and Nick Mason, Roger Daltrey of The Who and Genesis guitarist Mike Rutherford at the gig at Highclere Castle in Berkshire this summer (06). Clapton's spokesperson confirmed last night (29APR06), "Eric supports the Countryside Alliance. He doesn't hunt himself, but does enjoy rural pursuits such as fishing and shooting. "He supports the Alliance's pursuit to scrap the ban on the basis that he doesn't agree with the state's interference with people's private pursuits." The ban on fox hunting was imposed by the British government in February (06), and the concert is expected to face opposition from animal rights activists.