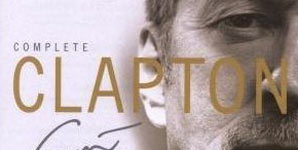 Heading into this disc expecting a 40 year career to fit into two discs will only lead to disappointment. The 'Complete' Clapton omits anything from the period when his guitar playing earned him the 'God' tag - nothing from what may be his best guitar album, John Mayall's Bluesbreakers; nothing from The Yardbirds, and a handful of tracks from Cream.

As a Best Of compilation, however, Disc 1 is a reasonable run through classics from Derek and the Dominos, Blind Faith and early solo albums - it's a steamroller reminder of the magic he has in his hands. Disc 2 does include his hits (not that he's troubled the charts much), including work with BB King, JJ Cale and (to his fans' eternal regret) the Phil Collins-produced albums. It points to his increasing reliance on middle-of-the-road songs and by-the-numbers soloing. It's hard to see this album as anything other than a Christmas release and a tie-in to his autobiography - it would be an odd fan who didn't have all of this already. As it is, there have been several Best Ofs already - Timepieces, Cream Of, Crossroads, as well as the previous 'Best Of' - and this is just a repackaged version of those.