Enrique Iglesias has had to have reconstruction surgery on his hand after it was sliced by a drone, whilst on stage in Tijuana, Mexico. 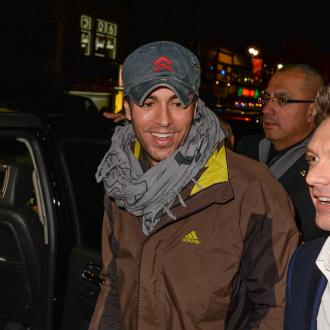 The 40-year-old singer was performing at Bull Fight Ring in Tijuana, Mexico, on Saturday night (30.05.15) when he grabbed a drone - which he intended to use to try and capture an image of the crowd - but slipped and sliced two fingers, on which he has now had an operation.

A spokesperson for the 'Hero' hitmaker - who continued to perform for 30 minutes after the accident before being flown to a Los Angeles hospital - has confirmed he was undergoing surgery yesterday (01.06.15) and his 'Love and Sex' world tour will resume in Mexico City on 3 July.

Following the accident, Enrique's representative confirmed the singer had defied medical advice and continued the show after something ''went wrong''.

The spokesperson, Joe Bonilla, said on Instagram: ''During the show a drone is used to get crowd shots and some nights Enrique grabs the drone to give the audience a Point of View shot.

''Something went wrong and he had an accident. He was semi-treated by crew on the side of the stage to try and stop the bleeding. He was advised to stop the show.He decided to go on and continued playing for 30 minutes while the bleeding continued throughout the show.''

The 'Tired of Being Lonely' hitmaker's representative went on to thank fans for their ''love and concern'' and revealed that Enrique was met by an ambulance at the nearby airport after his show.