Enrique Iglesias Is Turning His Traumatic Hand Injury Into A Positive Experience By Throwing His Support Behind A Charity Benefiting Children Who Are Dealing With Emergencies. 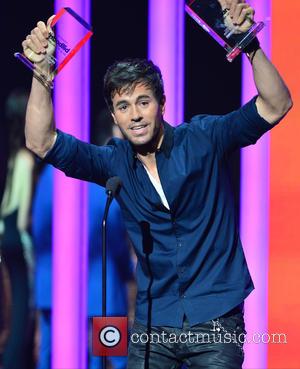 The Hero singer suffered nasty cuts to his hand while performing in Tijuana, Mexico after reaching out to grab a flying drone, which he uses to capture video footage at his shows. The device sliced into his fingers, but he refused to end the concert early and was photographed with blood dripping from a makeshift bandage onto his white T-shirt, on which he drew a heart.

He has now teamed up with organisers at Save the Children to sell T-shirts, featuring the bloodied, heart image, on his website.

"I'm extremely excited to partner with Save the Children to help kids who need it the most," a statement from Iglesias reads. "My heart goes out to the kids around the world who have lived through a humanitarian crisis and have to rebuild their lives from scratch."

"We have to take care of those who need us most - children, especially those facing crises around the world," he adds.

A portion of proceeds from each T-shirt sale will go to the organisation.