The singer injured his hand onstage Saturday during a concert in Tijuana, Mexico.

Enrique Iglesias has thanked fans for their support and assured them he’s on the mend after his freak drone accident last Saturday. The singer sliced some of his fingers while on stage last Saturday in Tijuana, Mexico when he grabbed a drone used to take crowd photos. 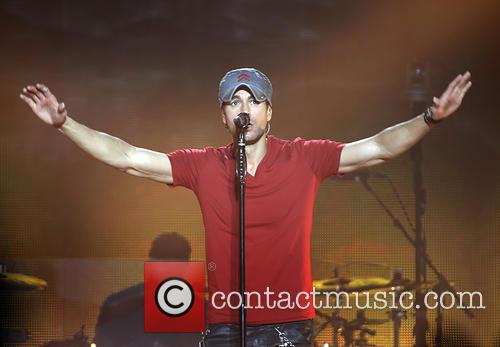 Enrique is on the mend after his frightening accident.

Taking part in an Instagram Q & A session with fans the singer posted a pic of his good hand with the words "Thank You!” written on his palm in red. ‘Wanted to do something special to thank all you guys for your love and support this week’, Iglesias captioned the pic.

More: Enrique Iglesias Slices Some Of His Fingers During Mexico Concert

During the special Q&A one fan asked the singer, "When are you resuming your tour?” Iglesias then replied in Spanish writing,"My hand is getting better little by little. I am going to Mexico at the beginning of July, so see you there!”

Iglesias managed to continue his concert last week, playing with a bloodied hand after the accident. A representative for the singer later confirmed what had happened telling the Associated Press, “During the show a drone is used to get crowd shots and some nights Enrique grabs the drone to give the audience a Point of View shot. Something went wrong and he had an accident,”

"He decided to go on and continued playing for 30 minutes while the bleeding continued throughout the show. He was rushed to the airport where an ambulance met him there. He was then put on a plane to L.A. to see a specialist.”

Enrique ended his special Q & A by posting a pic of his dog in front of an iPad and writing, ‘Thanks for all the questions today guys and for everything you did for me this week. It really helped. I love you all. Here’s my special guest who helped me with the typing today.’