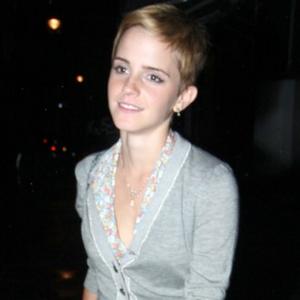 The 20-year-old actress - who starred in the 'Harry Potter' franchise from the age of 11 - admitted finding suitable clothes to wear to showbiz events as a teenager was so difficult she was often forced into the bridal section.

She said: "Everyone images stylists were on tap from the studio, but we got nothing. Sometimes I had two days' notice before an event and there was nothing appropriate for a 14 year old to wear. I'd look in my wardrobe and there was literally nothing.

"It was either borrow from my stepmother, or go to the bridesmaid department at Harrods."

Emma has since fronted campaigns for the likes of CHANEL and Burberry, but admitted starring in 'Harry Potter' was restricting in terms of her style, which was instrumental in her recent decision to have her hair cut into a pixie crop.

She said: "For the nine years I was on 'Harry Potter I was contractually obliged not to cut my hair, not to tan. All the normal things girls do, I couldn't. So when I got the chance to change my appearance, my hair is what I did.

"I didn't realise until afterwards how significant it was because, of course, The Hair was Hermione's defining feature."