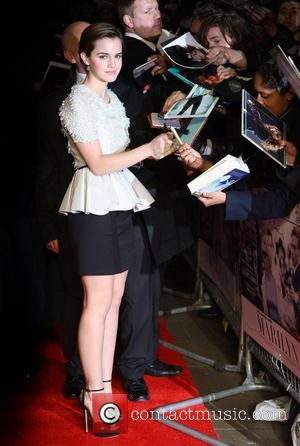 Emma Watson was snapped out and about in London, and she wasn't alone. One of the stars of the 'Harry Potter' adaptations, Watson has become one of the most sought after women in the world with several modelling contracts also aiding her reputation as one of the most attractive celebrities in the world. One lucky man seems to have potentially snagged the 21 year-old however, after she was snapped out shopping with him in the city centre.
Watson and the dark-featured mystery man were out shopping for lingerie, believes the UK's Sun newspaper, and even went as far as to wear matching outfits as they both sported narrow black coats and scarves. Although the pictures were fairly cryptic as to the nature of their relationship, one of the snaps did show the man leaning down to kiss the actress on the cheek. Her last relationship was thought to have been with One Night Only's George Craig.
This year marks a big one for the alumni of the 'Harry Potter' franchise, with it being the first year since the final one of the eight films screened. The film's main star Daniel Radcliffe has been wowing on the stage in New York with the lead role in 'The Women In Black' also among his things to look forward to. Rupert Grint has two films coming out, 'Into The White' and biopic 'Eddie The Eagle', but for Watson? Currently her only film scheduled for release is 'The Perks Of Being A Wallflower,' though she is admittedly juggling her career with studying English at the University of Oxford.