Emma Watson enjoyed her ''epic'' kissing scene with Logan Lerman in 'The Perks of Being a Wallflower'. 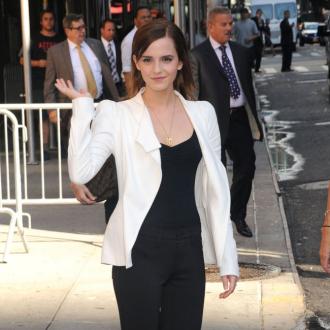 Emma Watson enjoyed her ''epic'' kissing scene in 'The Perks of Being a Wallflower'.

The 22-year-old actress has a steamy smooch with Logan Lerman in the coming of age drama, and was so moved by the scene when she read the script, she knew she was going to have to be a special on set moment.

She told MTV News: ''I mean, when I read our first kiss scene, it's so epic. It's like the most beautiful scene I've ever seen written on a page. And it was like, 'Oh, we're going to have to kill this one!' Like, it's so good, I wanted to do it justice. And it's so emotional and we're both so vulnerable in it, but the main thing was I get to do it with Logan.

While Logan made Emma feel comfortable for the scene, he was not so confident about the kiss because he was nervous about locking lips in front of the crew.

He explained: ''[It was] nerve-racking. Those scenes are always hard to do when there's 15, 20 other people in the room.''

'The Perks of Being a Wallflower' - which also stars Ezra Miller - follows the story of three teenagers as they come of age and deal with issues including loss, homosexuality, addiction, love and depression.