Emma Watson admits the kiss between her and Rupert Grint in 'Harry Potter and the Deathly Hallows' is ''highly anticipated'' because there have been no other sexual scenes in the movie series, unlike 'Twilight'. 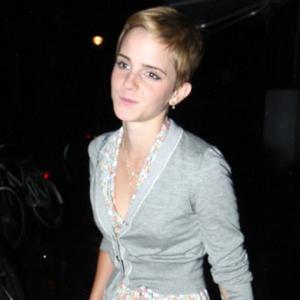 The actress - who has played Hermione Granger in the wizard film franchise since 2001 - admits it was exciting and awkward when she had to lock lips with her co-star Rupert Grint while shooting 'Harry Potter and the Deathly Hallows' because the films aren't filled with saucy scenes like the vampire thriller movies.

She explained: "This kiss between Hermione and Ron is highly anticipated, it's been building up for eight films now. And 'Harry Potter' is not Twilight', you know; we're not selling sex. So, whenever there is any hint of that, everybody gets terribly excited. In fact, it was horribly awkward; we couldn't stop laughing."

The pair discussed their intimate scene in great detail before they finally kissed, and agreed that feeling uncomfortable would be worth it if it looked good on screen.

She explained to Empire magazine: "The nicest thing about it was, before we did it, we turned to each other and were like, 'God, this is going to be awful, isn't it?' but hopefully it will look good."