Emma Watson Cuddles Up To New Man At Coachella

Emma Watson was spotted kissing and cuddling her new boyfriend Will Adamovicz as the pair attended the Coachella music festival over the weekend. 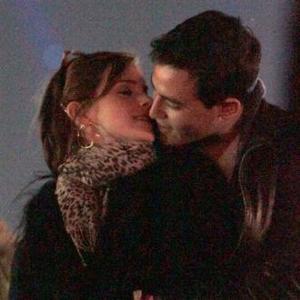 Emma Watson was spotted kissing her new boyfriend at the Coachella music festival over the weekend.

The 'Harry Potter' actress and her latest love - believed to be American student Will Adamovicz - have reportedly been dating since meeting in Oxford six months ago where they are both studying and weren't shy about showing their affection for each other.

The couple kissed and cuddled while watching bands including the Arctic Monkeys perform at the festival in California.

A dressed down Emma - who turned 22 yesterday (15.04.12) - sported jeans, a leopard print scarf and a feathered gilet with sunglasses as a hairband.

Emma has previously dated Johnny Simmons, after meeting on the set of 'The Perks Of Being A Wallflower' although the relationship broke down when he refused to follow her to the UK when she enrolled in Oxford's Worcester College for a year.

She also had a brief romance with One Night Only frontman George Craig and split from Jay Barrymore in 2010 after four years of dating.

Last year, Emma complained men are intimidated by her fame and never ask her out.

She explained: ''It must be the fame wall. It must be the circus that goes around me. I find it hard to believe I can be intimidating.''