The star, and committed advocate on environmental issues, took to the streets with dozens of Greenpeace protestors on Wednesday.

Emma Thompson has added her voice to the Greenpeace protests occurring outside Shell’s headquarters on London’s Southbank over the last several weeks, helping the demonstrators and telling the attendant media that people needed to “get the f*** involved” in order to prevent damage to the environment.

On Wednesday (September 2nd), the 56 year old actress joined with Greenpeace’s ongoing protests, which have lasted a number of weeks, against Shell’s Arctic drilling programme. It has attracted the attention of top classical musicians who have composed ‘requiems to the Arctic’, and the support of other celebrities such as Charlotte Church. 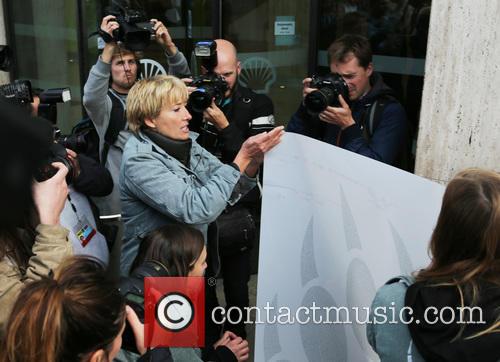 “Shell haven’t been listening. Shell have ignored the science. They want to drill in the Arctic up to the year 2030. It seems to me a monumental act of selfishness and greed. We cannot go on extracting oil in the way that we have,” Thompson explained, before reading a poem she composed live on Sky News.

“I've been to the Arctic, I've seen the beauty, I've seen the wildlife, and my heart breaks to think that Shell is up there right now, drilling for the oil that threatens not only their habitat but ours.”

More: Emma Thompson claims Hollywood sexism is worse than ever

The protestors also erected a bus-sized puppet polar bear outside Shell’s HQ, with six of its activists tied to it. Greenpeace says it is committed to remaining outside the building until the end of September, when the window of time in which Arctic drilling is possible closes for the year.

A Shell spokeswoman said later on: “Shell respects the right of people to protest against the activities we undertake to ensure the world's energy needs are met. However, it is disappointing that Greenpeace continually chooses to focus on mounting publicity stunts rather than engage constructively in the debate about how to meet the world’s growing demand for energy while reducing CO2 emissions.”