Emma Stone is worried people will ''f**k with her'' by leaving money around after she spoke of her belief her dead grandfather leaves coins for her to find. 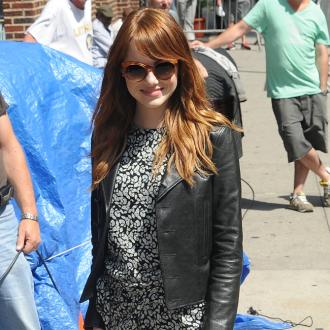 Emma Stone is worried people will ''f**k with her'' by leaving money around.

The 'Magic in the Moonlight' actress recently spoke of her belief her late grandfather leaves her quarters, and is now concerned other people will find it funny to secretly put coins around her so that she thinks it is a sign from her dead relative.

Discussing her revelation, which she made to talk show host David Letterman, she said: ''I wasn't even going to talk about that [on Letterman], but then he was telling me a true story about a woman on his show that died who taps him on the shoulder and talks to him a bit.

''I completely regret telling that story about my dead grandfather that leaves quarters because now I feel people are just going to leave quarters around to f**k with me.

''It was this sweet family thing where my mom found them, my aunt found them, and now it's going to be like, 'Oh look, there's a quarter!' Ugh.''

The 25-year-old beauty - who is in a relationship with Andrew Garfield - thinks it is possible to believe in other-worldly experiences while also retaining an element of doubt.

She told The Daily Beast: ''I've been to a medium and a psychic... I am a total skeptic, and a believer. Both things co-exist.''