Emma Stone Left Moviemaker Woody Allen Flustered While Trying To Explain Twitter To Him On The Set Of Their New Movie Irrational Man After Reading Out A Quote From One Of His Films Used By An Author. 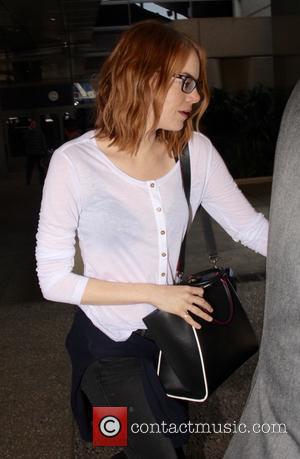 Picture: American actress Emma Stone who has starred in movies such as 'Birdman' and 'The Amazing Spider-Man' was snapped as she arrived in to Los Angeles...

The director was considering opening a Twitter account and turned to his leading lady for some tips.

She explains, "He asked me what Twitter was. I had to explain Twitter to him... and he said, 'What's a good example of something that someone has put on Twitter?'"

Stone chose to trawl through one of her favourite author's Twitter accounts and turned to Joyce Carol Oates' social media musings.

She adds, "I was looking and I said, 'Here's a great one' - she wrote, 'Tragedy plus time equals comedy...' and he goes, 'That's my line... in Crimes and Misdemeanors, Alan Alda, we did it about 40 times. I don't think she intentionally stole my line. Maybe she just remembered it. But it's very funny. I see the point.'

"My only example was his own quote."