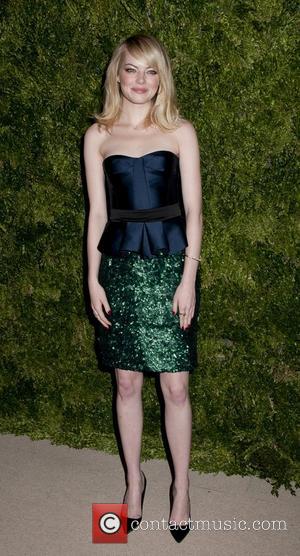 Emma Stone's alleged sex-tape does not feature her Amazing Spider-Man co-star and current boyfriend Andrew Garfield. RadarOnline.com previously reported how a home video of the Easy A star was in existence, though the website claims her beau Garfield is nowhere to be seen.

Stone, 24, is said to have "a wild streak that has culminated itself in the form of a homemade sex romp". Hmm. Radar even quote a source privy to the clip, who says, "Emma Stone has a sex tape and that's a fact. She made it long before she started dating Andrew Garfield and before she really became a household name. She was just young and probably thought nothing would ever come of it." The good news for the actress is that the tape is yet to be shopped around and "remains in the hands of the person she made it with." However, the source warns, "but that doesn't mean there's any guarantee that it won't eventually hit the market. The higher Emma's star rises, the more valuable that tape becomes."

Though it's worked pretty well for Kim Kardashian and Paris Hilton, the release of a tape would likely hinder Stone's promising Hollywood career. In fact, an insider said, "There's no way she would organize the release of the tape; in fact, she would fight to stop it." The actress next stars in comedy Movie 43, alongside Stephen Merchant and Richard Gere.