Emma Stone finds it ''hilarious'' to be named Vogue's 'Best Dressed' celebrity of 2012 as it is her stylist Petra Flannery who is the ''voice of reason'' behind a majority of her outfit choices. 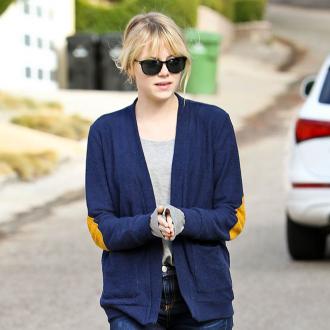 Emma Stone finds it ''hilarious'' that she is a style icon.

The 'Easy A' actress topped Vogue magazine's 'Best Dressed' celebrities issue in 2012 and although she is known for classic outfits, Emma always ensures she stays true to her own style, praising the guidance of her stylist Petra Flannery.

She revealed: ''[Being named 'Best Dressed'] was just hilarious. I mean, I have a stylist, and she's the voice of reason behind anything I've worn on the red carpet over the past few years.

''She knows that I won't dress like a fairy princess, wear a lot of glitter or anything that makes me look like a Victorian doll. If I could wear those things and not look like Dakota Fanning when she was eight, maybe, but I just don't look good on them.''

Emma, 24, also credits her mother Krista for telling her what to avoid wearing when growing up and feels confident enough in her own skin to not ''lose sleep'' over her insecurities.

She added to Britain's Glamour magazine: ''When I was a teenager and all the cool girls were wearing their pyjama pants in school, my mother would forbid me to do that - or to let my bra straps show.

''Everybody has parts of their body that they dislike, but I'm not going to lose any sleep over them.''