The 25 year-old actress easily beat the chat-show host when going head-to-head in a hilarious segment on 'The Tonight Show'. 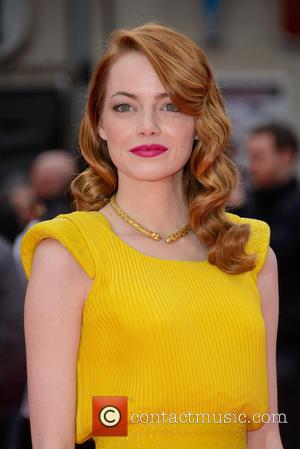 Emma Stone is already known as a phenomenal actress, but she does have other talents.

The 25 year-old showed that she can pull off a very convincing lip-syncing act while appearing on 'The Tonight Show Starring Jimmy Fallon.'

On Monday (April 28th), Stone went head-to-head against the chat show host in the hilarious segment where each individual had to mime a song of their choice.

And it was epic!

The 'Amazing Spider-Man' actress came back even stronger with her own version of 'Hook' by the Blues Traveler, which she knocked out of the park.

After the competition was over, Fallon looked at Stone in shock and said, "I can't even talk to you right now."

"I forgot all about that song," he continued. "So good. I really gotta pick it up now. I've gotta up my game."

The 39 year-old funnyman's second choice was 'Mr. Roboto' by Styx, and he tried to pull out all the stops by adding some very questionable robotic dance moves.

Stone's final song was DJ Khaled's 'All I Do Is Win,' and that is what she did! The talented actress owned every single lyric and was easily the better performer.

MORE: 'The Amazing Spider-Man 2' - Not Perfect, But Really, Really Fun

"That was the best one that has ever been done on the show," he said. "Emma Stone, the winner right now. Clear, clear, clear winner."

Stone appeared on the talk-show to discuss her new movie, 'The Amazing Spider-Man 2,' in which she stars alongside her real-life boyfriend Andrew Garfield, and Jamie Foxx, which hits theaters Friday (May 2nd).