Emma Stone: Hot Or Not At The Met Ball? 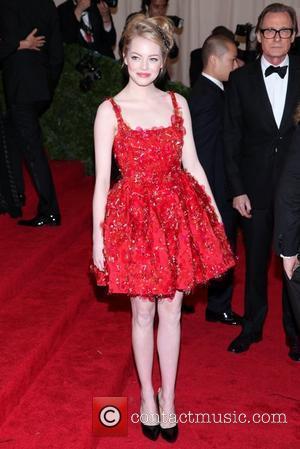 Talk about fashion forward: Emma Stone rocked up at the Met Ball on Monday night wearing a dress that was not only thoroughly stylish. it was pretty practical too, as it kept the Spider-Man star protected from the rain on the red carpet. Stone arrived looking stunning in the red puffball Lanvin dress, later telling People magazine, "It was pretty exciting. And I did love my dress. It was rainproof.Those plastic flowers! It was fantastic".
Sadly, the dress didn't hold up so well at the after-party, where the Crazy Stupid Love star suffered an embarrassing wardrobe malfunction. Her boyfriend and Spider-man co-star Andrew Garfield was nowhere to be seen so it was a good job that the now-blonde beauty had the dress' creator on hand to help her out when the dress split at the zip. Luckily, she also had a dark red mac on hand to cover up the hole, whilst she headed for the after-party.
23 year-old Emma plays the role of Gwen Stacy in the forthcoming Spider-Man movie The Amazing Spider-Man. Andrew Garfield plays the lead role of Peter Parker / Spider-Man and the pair of them became romantically involved whilst they filmed the movie together. The movie is scheduled for release in July 2012 and will begin to answer some of the mysteries surrounding Peter Parker's secret family past.