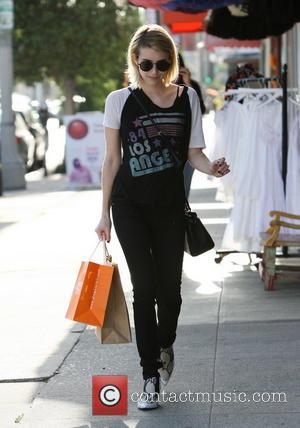 Actress Emma Roberts' 2014 Coachella festival fun came to an abrupt end upon her return home when she found her Hollywood pad flooded.

A pipe connected to the We're The Millers star's washing machine burst shortly after she left for the California music event last month (Apr14) and she got back three days later to find clothing and furniture ruined.

She says, "I get back from Coachella and I'm like, 'Why is there water in the garage...?' and I open the front door and it's flooded. The whole house was flooded for three days while I was gone.

"It's horrible... All my clothes were pretty much ruined and so I didn't know what to do and I was waiting for my friends to come over and the insurance people and I just had to put on rainboots... and I was just crying."

And now she's kicking herself for not acting on impulse and replacing her old washing machine just days before she departed for the festival.

Roberts adds, "I remember walking by it, being like, 'I wonder if I need a new washing machine? Nah, I'm good'. Then the pipe burst."

And the young star also had a psychic tip about the disaster: "A month prior to this, my friend was having a dinner party for this astrologer and she was, like, reading everybody's charts... and she was like, 'Oh, there's a flood coming!' And I was like, 'Ok! Whatever'. After the flood happened I emailed her and I was like, 'Is there anything else I need to know?' I haven't heard back and I'm kinda worried."

April was a bad month for the actress - she was also ticketed for driving without her licence while talking on her cellphone. She faces a day in court in July (14).