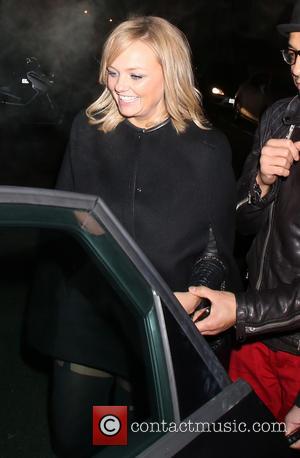 British pop star Emma Bunton had a Valentine's Day to remember on Friday (14Feb14) when her fiance Jade Jones serenaded her live on the radio with his band Damage.

The former Spice Girls star is now a full-time presenter on the U.K.'s Heart Radio, and during her breakfast show on Friday, she was given a surprise visit from Jones, who turned up holding a huge bunch of red roses for his partner.

He was joined by his Damage bandmates, who sang an a cappella version of their hit Love II Love for the stunned star.

Bunton writes in a subsequent post on her Twitter.com page, "Had an amazing morning with a surprise from Jade Jones and Damage @HeartLondon they serenaded me with 'Love II Love'."