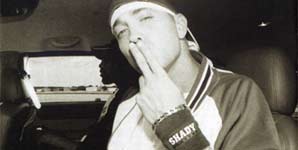 To Celebrate the release of Curtain Call – The Hits Collection - We have 2 Eminem hoodies, 2 albums, 5 posters & 5 singles to giveaway!
Click Here To Enter

Did you know, George W Bush described Eminem as 'the most dangerous threat to American teenagers since Polio'

Now the most successful rapper of all time gathers all his singles on one album for his first hits collection. 'Curtain Call – The Hits' will be released on Aftermath/Interscope on Friday December 2nd (just in time for Christmas kiddo!!) The album also features a brand new single 'When I'm Gone' which will be released on December 12th. As well as the new single, the hits collection will include two other new tracks that are so-fresh-from-the-studio-we-aren't-even-giving-you-the-songs.

Since his debuted with 'My Name Is' in 1999, he has sold over 65 million albums. His work has been recognised by the Grammys [9 awards] the Brits [4 awards] and an Academy award for 'Lose Yourself'.

Click here to watch videos for Eminem's new single 'When I'm Gone' plus 'My Name Is' and 'Stan' - tracks taken from the new album 'Curtain Call - The Hits'.