Eminem's ten biggest-selling hits in the UK, including collaborations with other artists.

One of the most successful and iconic rappers of all time, Eminem has been back in the news this week after he dropped his surprise new album Kamikaze at the end of last week.

In celebration of his career – his debut album was released very nearly 20 years ago – we count down Eminem’s most successful British chart hits. 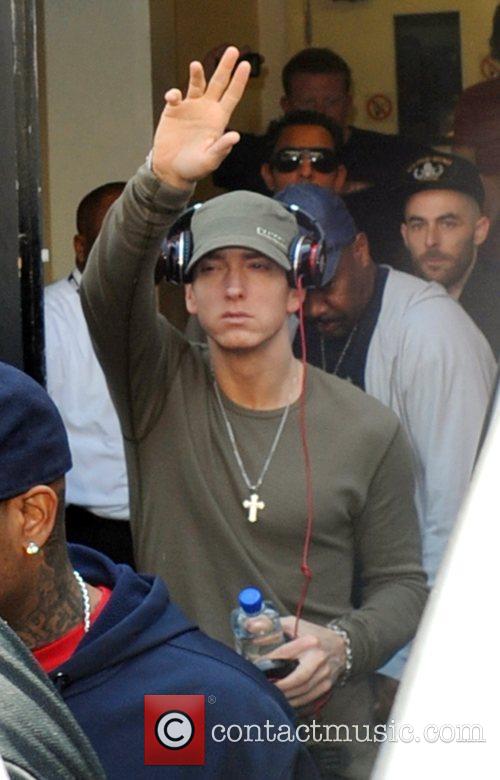 The second single for Dre’s long-awaited second solo album 2001: The Chronic saw the Aftermath impresario team up with his latest protégé. Set to minimalist beats and a memorable musical bed of stabbing, defiant strings, ‘Forgot About Dre’ sees the pair practically write the book on the art of self-mythologising in hip-hop, and it hit no.7 in the UK charts in the late spring of 2000.

A prosaic club banger that teed off R&B star Akon’s second album Konvicted furnished Eminem with another hugely lucrative collaboration. A huge hit in America - the 76th biggest selling single of the 2000s there, no less – ‘Smack That’ saw Em adopt a slightly lower register than normal, but it’s basically the best element in a slightly played-out and dated style.

“Hi kids! Do you like violence?” went Eminem’s debut single, included on his first full-length album The Slim Shady LP way back in 1998, and an instant legend was born. An almost cartoonishly simple song that introduced a brand new talent to the world at large and with lyrical concerns about his mother’s drug-taking and impregnating Spice Girls, ‘My Name Is’ was an immortal curtains-up.

Although it was the lead single from a comparatively unloved album in 2010’s Recovery, ‘Not Afraid’ is perhaps a surprise in the list of Eminem’s ten most successful singles of all time. However, it received great praise for its stormy, intense atmosphere. Incessant product placement of Nike trainers and Beats by Dre headphones in the music video drew sharp criticism, deservedly.

One of the finest hip-hop songs of its age and, arguably, still Eminem’s calling card after 18 years, ‘The Real Slim Shady’ was in many ways a sequel to ‘My Name Is’, with the emphasis on reputation and mythology once again. The lead single to his violent masterpiece The Marshall Mathers LP, it also took aim at a host of plastic celebrities and the manufactured faux-outrage of the American media to his debut.

Doubling down on the same kind of self-referential themes that made ‘The Real Slim Shady’ so successful two years before, the rapper’s third and final masterpiece The Eminem Show was led off by yet another monster chart-topper in ‘Without Me’. Hitting no.2 in his native America and the top of the charts in 15 countries around the world (including the UK), it’s still one of his most famous tracks.

Following up on the huge success of their first collaboration ‘Love The Way You Lie’ two years before, Em teamed up with Rihanna once again, and the results were predictably stellar in commercial terms. A number one hit virtually all around the world and ubiquitous on radio stations for years subsequently, in no small part because of its maddeningly infectious chorus, ‘The Monster’ was so huge that it was the 16th biggest-selling hit in the US the following year.

A tragic story told empathetically and from two different perspectives, of a rap megastar and an overly dedicated fans, ‘Stan’, including a wistful chorus sample from British singer Dido, was a reflective moment that many previous sceptics of Eminem could get on board with. Selected as the third single from The Marshall Mathers LP, it would surely have been a chart-topper if it weren’t for the Christmas tussle between Westlife and a certain Bob The Builder.

It’s curious that one of Eminem’s worst-received records should spawn two of his most successful singles ever. ‘Love The Way You Lie’ concerned getting over the trauma of difficult past relationships, and both Em and Rihanna (herself freshly extricated from Chris Brown), brought insight and emotional heft to a track that picked up five Grammy nominations and sold over a million copies in the UK.

An ever-present on gym playlists and sports montages since its inclusion in the movie 8 Mile, the do-or-die ‘Lose Yourself’ was always going to be on top of this list. Perhaps it’s because it’s not on any of Em’s studio albums, meaning people had to part with their money for it separately before the age of streaming, but with 1.8 million sales in the UK alone, ‘Lose Yourself’ puts all other Eminem hits in the shade.