Check out the 80s throwback video for Eminem's 'Rap God', below.

He’s sold over a million copies, is destined to stay in the Top 10 throughout the festival holiday, and now he has a new video for his controversial, multi-referential single Rap God, which you can watch below. 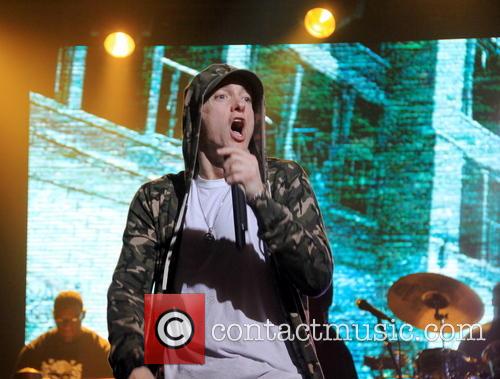 Eminem makes several pointers to his rapping style being robotic in the song – something he presumably takes as a compliment – and this is evident in his video.

Whether he’s a strange incarnation of Max Headroom, or strapped to a bunch of wires, the theme is wholly mechanical, which is ironic considering he lauds himself as a genre-based deity through out the choruses and within the title of the track.

Rich Lee, who has previously worked with Eminem, directed the video. He was involved in 'Not Afraid' and 'Lighters' videos – Rap God was shot at the Russell Industrial Centre in Detroit.

Two singles from his comeback album already have videos, with 'Berzerk' and 'Survival' selling well. And fans won’t be sitting around twiddling their thumbs, waiting for yet another Eminem video, as Rihanna shared an image from the set of another single, The Monster.

Yesterday (Nov 27) Eminem’s childhood home was demolished, following a dramatic fire that rendered it unsafe for habitation. The house, which featured on Eminem’s 2000 album, The Marshal Mathers LP, as well as his most recent record, was owned by the rapper's mother between 1989 and 2003.

MLive - a local Michigan paper - reported the news of the house’s demolition. "The condition of the property post-fire presents a safety hazard that the Land Bank is responsible for removing," Michigan Land Bank director Kim Homan said in a statement. "The goal is to demolish and clean up the site, so neighborhood safety and order can be restored."