Traiveller's Joy is certainly not an inappropriate title for an album with such an emphasis on the folk wave we're all apparently riding at the moment. Maybe it's a way to be all free and light when actually we're all tied down and fed up. Who can say. Look around the shops and you see smock dresses and crochet, and in music you find the likes of Emily Smith. 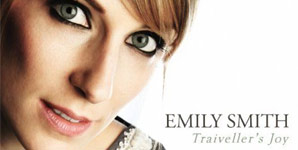 Emily Smith is not new to music, she already has so many achievements behind her including a degree in Scottish Music, and Winning BBC Radio Scotland's Young Traditional Music of the Year Award in 2002. She certainly has an idea of what she likes, and a clear path.

In promotional terms Emily is likened to Joni Mitchell and the likes. I'm not sure that actually gives her individual talent enough recognition. The likes of Joni Mitchell, Eddi Reader, and Kirsty MacColl have all had that folk label slapped on them, and they all share that incredibly strong and determined style. So you can see where it has come from, and I wouldn't ever dismiss the similarity. Yet I would say Emily Smith had adapted their styles to influence her own.

Traiveller's Joy offers a mixture of original and covers, all very light and clear. This is real folk music, with pipes and all. There is nothing apologetic about it, she wants Scottish roots to her music and that's what she confidently delivers. Yet you can't help but picture the Scottish glens and an American film using every Scottish stereotype you can think of.

Emily has the sweetest, strong and crisp vocals, and clearly a lot of talent. She may not offer heavy bass lines and DJ/producer samples, but if you like the raw back to basics styles then you'll get on with Emily Smith.

Definitely a quaint album, which may come across as indifferent for a lot of listeners, but with that said; many will appreciate Traiveller's Joy for its simplicity.