Emily Ratajkowski says Robin Thicke's 'Blurred Lines' music video has become ''the bane'' of her existence and she almost rejected the offer to star in it. 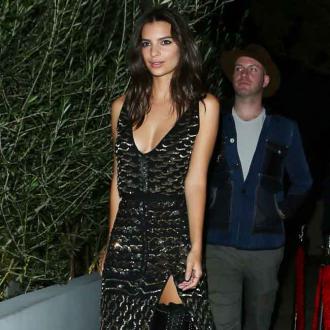 The 24-year-old actress, who rose to fame after appearing topless and wearing skimpy nude underwear in the racy video, claims she almost rejected the opportunity to star in it.

The brunette beauty told the October issue of the UK's InStyle magazine: ''I wasn't into the idea at all at first. I think I came off as a bit annoyed in the video.

''Now, it's the bane of my existence. When anyone comes up to me about 'Blurred Lines,' I'm like, 'Are we seriously talking about a video from three years ago?' ''

The 'We Are Your Friends' star says doesn't understand why ''a woman's naked body is so controversial in our culture.''

She added: ''My mum taught me to never apologise for my sexuality. My dad never made me feel embarrassed. I also don't think I've ever had an awareness of my own body as being super-sexual. It was always just my body.''

But Emily insists there are still ''a few things'' she doesn't like about her figure.

She said: ''There are a few things I don't like about my body, like that part of my thigh beneath my butt. But my friends will say I'm crazy and I know it's just my perception. You can't beat up on yourself.''