Emily Ratajkowski hides when she hears 'Blurred Lines' in bars because she's embarrassed about her nude role in the video. 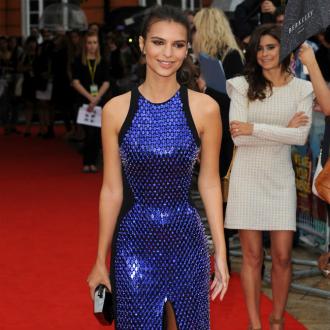 The 24-year-old bikini model and actress was made famous when she starred in the music video in which she appears naked and Pharrell and Robin Thicke are fully clothed, singing ''You know you want it'' at her, but says it now makes her cower in embarrassment and she even mistakes it for Marvin Gaye's 'Give it Up'.

She said: ''I have to say, from someone who really knows the beginning of 'Blurred Lines' when it comes on, half the time it's the Marvin Gaye song, but I've already tried to leave the place or hide, and then it's like. 'Oh it's the Marvin Gaye one, what the f**k was I stressing about? They're that similar.''

The 'Gone Girl' actress wouldn't appear in the video if asked now.

She said: ''I think I've done enough nudity now that I don't really need to do 'Blurred Lines' again. Like, if someone asked me to do it now, I'd probably say no.''

Whilst the brunette beauty insisted she has no regrets, she confessed she didn't actually like the idea of the project - which was later accused of being ''rapey'' - when first approached, and also didn't care that it was Pharrell Williams who wanted her to do it.

She said: ''It was so bad. I was like, there is absolutely no way they could pay me enough money.

But acclaimed music director Diane Martel - who has worked with Miley Cyrus - convinced the star.

She told GQ magazine: ''We just connected personally, she's smart, she's really culturally sensitive, and she talked to me about her ideas and how the women would be in the video.''