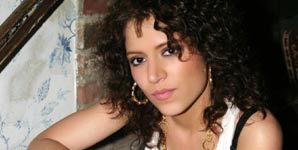 King may be just 21 years old, but this girl is a throwback to another era. The music on her J Records debut, East Side Story, reveals roots that are deep and ambitions that are grand.

As the daughter of two singers - one Italian, one African-American - who performed internationally as a jazz duo, King was exposed to music, its challenges and its rewards, from an early age. She always knew she would follow in her parents' footsteps. "I had a hard time in school," she says, "because I already knew what I wanted to do, so I was like, let me just get started."

King had discovered hip-hop at about the age of 16 and immersed herself in a culture that would add yet another ingredient to her musical mix. She met producer Chucky Thompson, who signed her to his production company, and together they began searching for the right sound to capture King's eclectic tastes and styles.

Unable to be contained by any one category, Emily King represents the best of what our musical future might look like. Rather than concentrate on the differences between hip-hop and rock, party music and protest music, black and white, she's committing herself to finding common ground. "I'm just finding my own culture within myself," she says. "We have a lot of division in our society, but I was never raised like that. I feel like what I'm doing right now is going to bring a lot of people together.